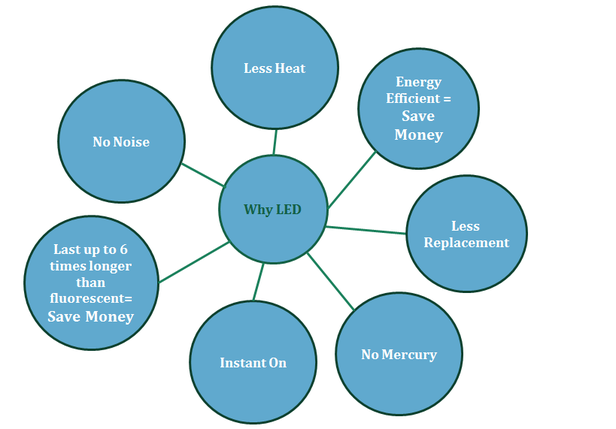 Energy Consumption: LEDs consume far less power than fluorescent tubes which is better for the environment and your pocket.

Environment : Fluorescent lights contain a small amount of mercury. This metal and vapour is extremely hazardous to both humans and the environment. If it is ingested or inhaled it can cause serious complications and as such must be disposed of safely. LEDs are completely safe and do not contain such poisonous materials, putting home owners and parents at ease while knowing that they are not contributing to pollution.

Noise: Fluorescent tubes can be noisy. LEDs do not have this problem and operate silently with no annoying quirks or noises.

Colour Most fluorescents produce only a cold blue/white light. It is stark and not very welcoming. LEDs on the other hand provide all manner of different colours easily for any purpose. This is what makes LEDs so adaptable. They can be used in almost any environment or lighting situation.

Instant On: LEDs light up as soon as an electrical current is passed through them. Fluorescents require time to flicker before staying on. Not only that, many fluorescent lights do not provide optimum illumination levels until they have been running for a few minutes. LEDs provide instant light and instant full illumination.

Durable : LED tubes are more robust than the fluorescent.

Heat : While fluorescent tubes emit less heat than incandescent and halogen bulbs, they still produce much more than LEDs. LEDs are lukewarm to the touch and therefore carry less risk of causing an accidental fire or burn.